All kids grew up with a list of fantasies that they wished were true. On this list is Santa, otherwise known as Father Christmas. This belief is passed down from generation to generation to today.

One way that was possible is because of the use of letters from Santa. Children would write to Santa, and he would respond with a letter of his own. If you are a parent or other person who wants to write a letter from Santa and don’t know how our templates will sort you out. 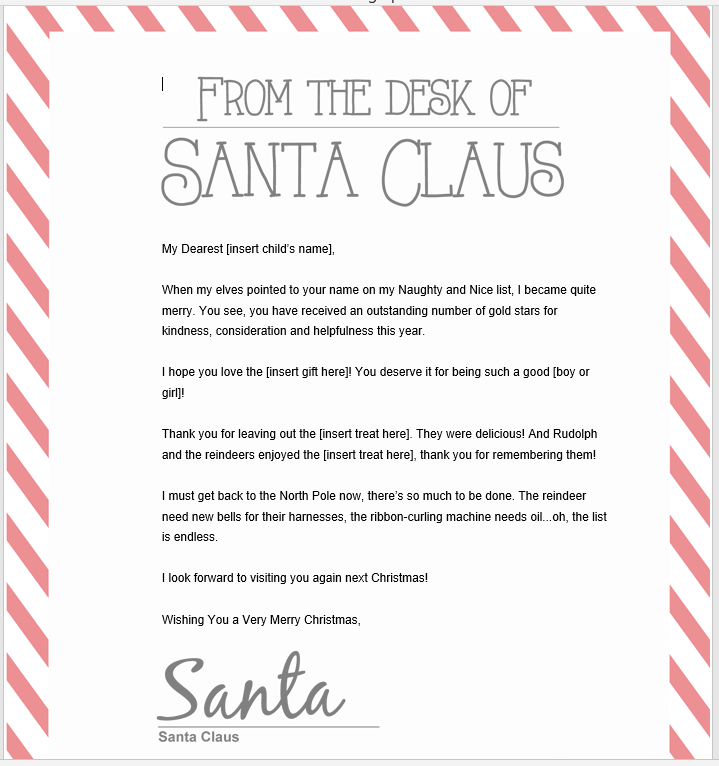 The essence of a letter from Santa is to encourage the child to be a better person. One good way to ensure the child becomes a better person is to reward their exemplary behavior. This template will enable you to show your child that Santa still noted their kindness and goodness, despite them being naughty.

At the bottom is his promise to visit again, which will have your child looking forward to the following Christmas.

2. Letter from Santa to Friends Template 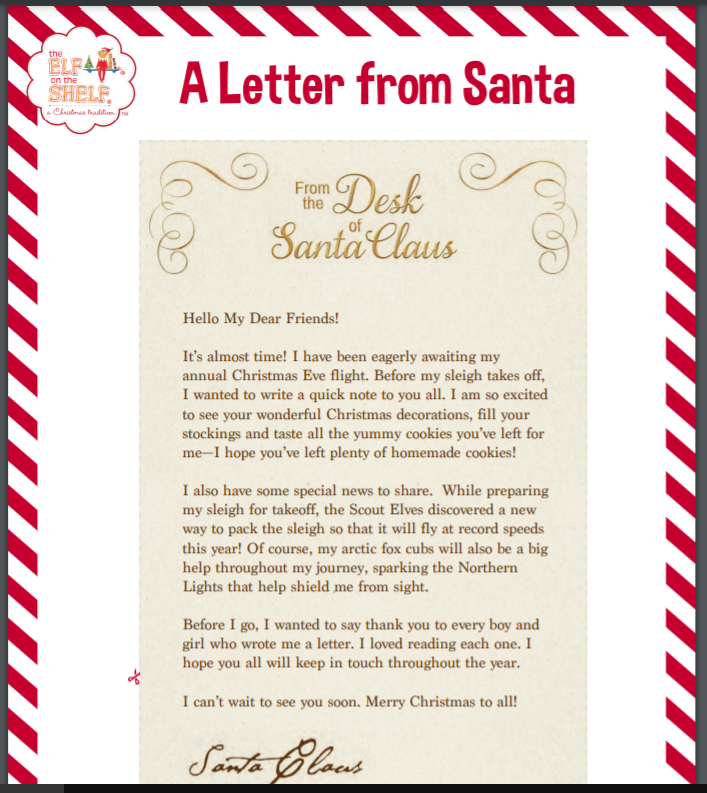 This letter from Santa template is ideal if you have several children, you’d want to send one letter. In the letter, Santa addresses them as friends, and on the down-low, entices them to help with the Christmas decorations (he can’t wait to see them!).

It will have your children anticipating Christmas time. And with only a few months to Christmas, the letter is all you could need to have them in the mood to help you decorate when Christmas comes around. 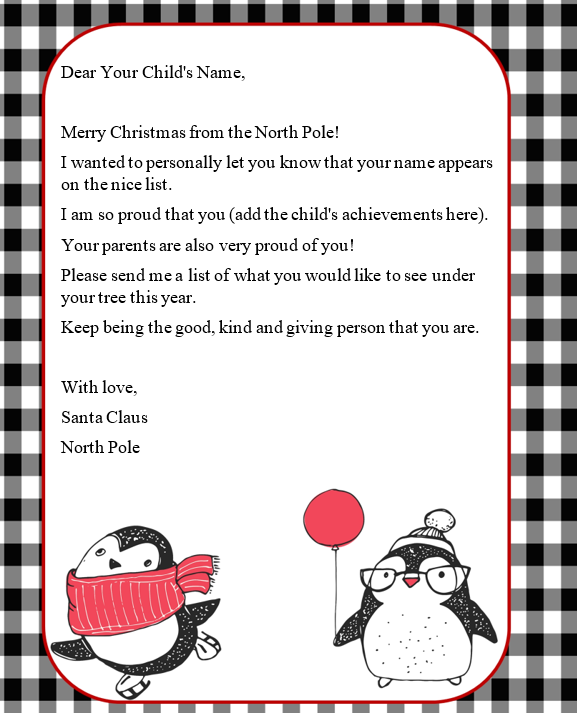 It is always nice when someone appreciates the lovely little things we did throughout the year. This letter template will enable you to appreciate and reward exemplary behavior from your child.

You could also use it to subtly ask the child for what they’d need as a Christmas present. See the list part. (don’t all parents wonder what is the best gift to get their child?) of course, you can edit the story to fit your child and situation if you think it might cause problems. 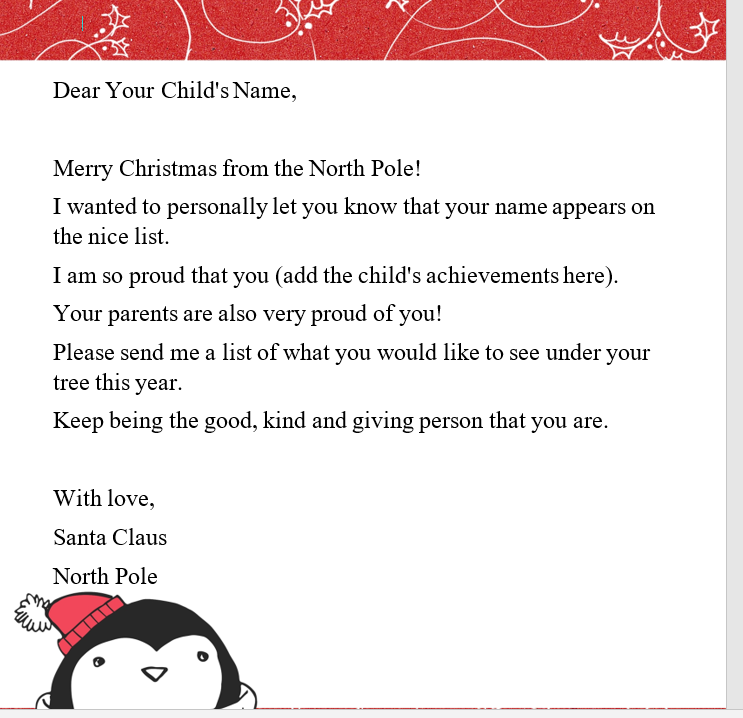 This letter from the Santa template contains nearly the same information as the previous one on our list. The only difference is in the design and border. That’s no problem since the templates are only to give you ideas on what to include in the letter from Santa.

Think of it as a subtle way to get your child to be a better person without appearing too pushy. 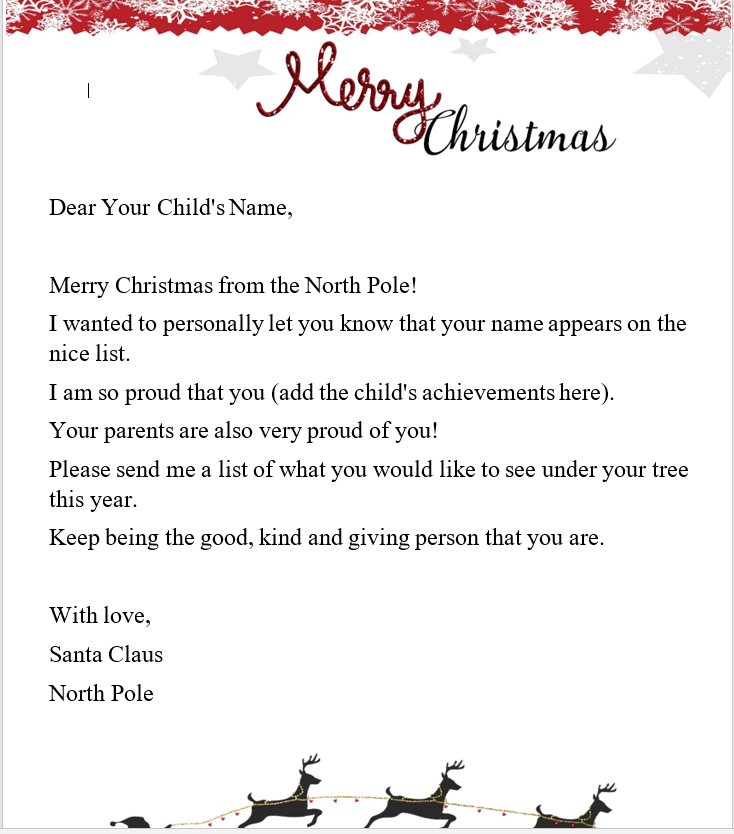 One thing that makes letters from Santa highly desirable for kids is the background and the decoration. Of course, most of them are usually white and red, which are Santa’s colors.

This one has a mix of both and the deer famous for carrying Santa’s sleigh. It doesn’t have to be precisely what you see in the letter. Instead, it should help pen the creative juices. That should enable you to write your letter to your kids from Santa. 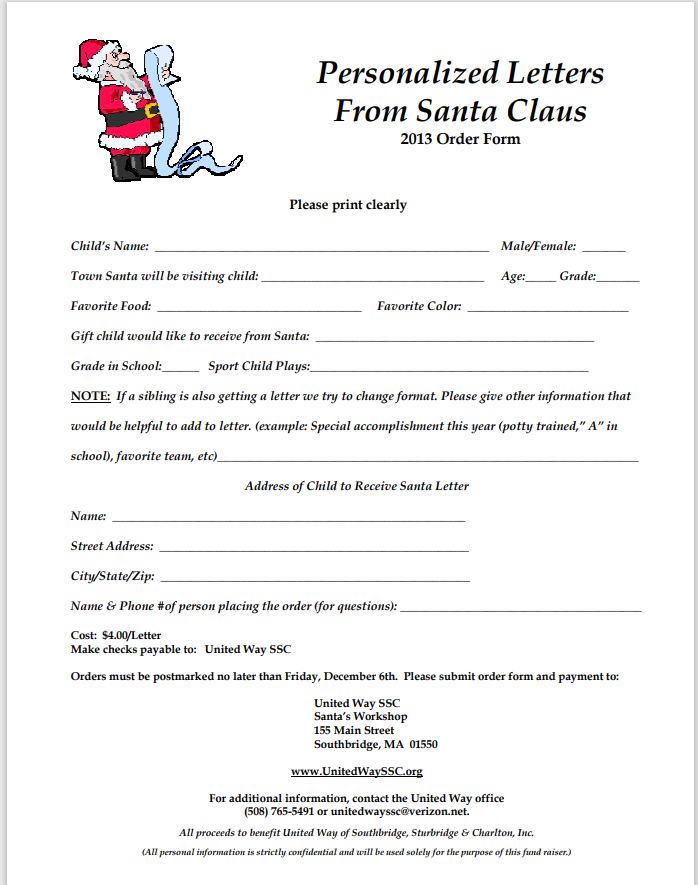 This template takes the official format a notch higher and might appear bland to some children since its devoid of many colors. It would, however, be an excellent choice for older children (say ten and 11-year olds).

All it does is make it easier for you to come up with your letter from Santa. Although the bland color makes it seem quite uninspiring, most kids wouldn’t mind seeing that’s it’s a letter from Santa. Just make sure it gets to them. 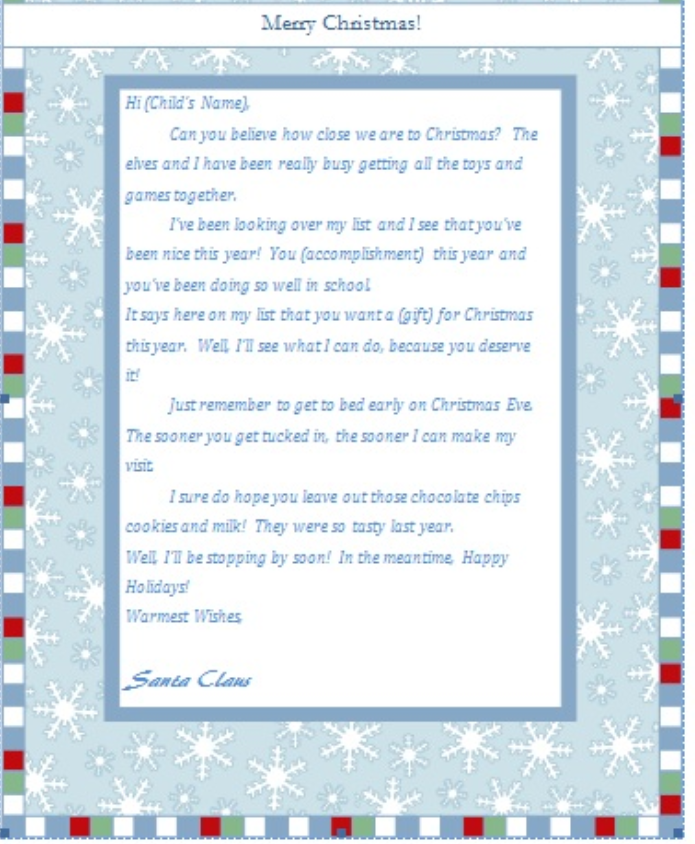 With the Christmas season almost with us, you can use this template to put the kids in the mood for the occasion. This template will help you teach the kids about giving back and being thankful for whatever they receive.

Nothing spreads the spirit of Christmas among kids than the notion of Father Christmas and his gifts. You can pique their interest with this decorative letter from Santa template. The decoration might make it plausible enough for the kids to believe it came directly from the North pole. 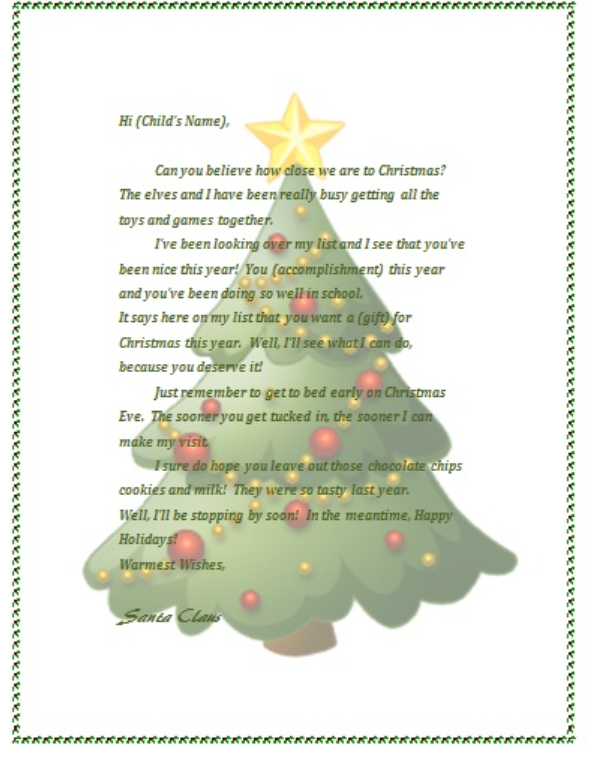 After sending the letters from Santa for some time, you might notice that the words get a little monotonous. That’s where the changes in the background come into place. One background picture that can never go wrong is the picture of a Christmas tree.

The decorated Christmas tree in this template will no doubt have the kids itching for Christmas. Tweak the story to fit your situation better, or add some decorations if you think the current ones aren’t that good. 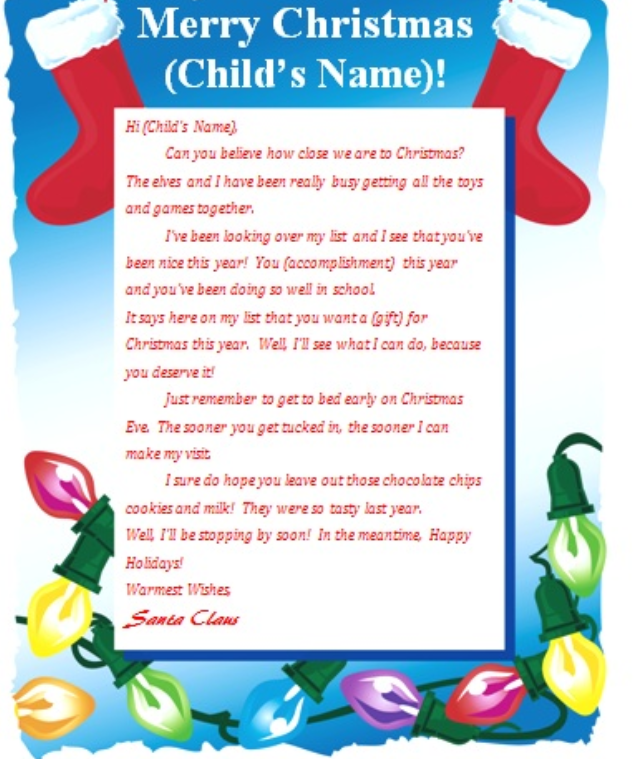 This is yet another decorative letter from Santa template. This one goes all out and includes the red stockings that most children would likely associate with Santa. It mentions school to enable you to appreciate your child for the superb performance they put in at school over the year.

Don’t forget to edit out parts you think won’t relate to your situation. After all, that’s the work of a template- to awaken your creative juices.

The Essence Behind Letters from Santa

Letters from Santa are a way to reward your children for their excellent behavior or something else by taking advantage of their childish fantasies. If your child believes in father Christmas and his elves and the north pole, it is only fitting that you get them a letter from Santa.

They will therefore be a way of introducing some Christmas cheer into your home. Also, nothing gets children helping as the allure of getting rewards for all their help. Therefore, use the Santa letter if you want your children to help you out with whatever Christmas work there is.

We know it might seem like an outright manipulation of the kids. But again, the kids need something to believe in for the spirit of Christmas to be in full swing before Christmas comes around.

How to make the Letter from Santa Special

There’s no doubt the letter will already be special. But there is still room for improvement in that aspect. For instance, including a gift with the letter will go a long way in making the letter somehow memorable.

You could also include a child’s picture in the letter to add that extra layer of magic. Besides that, you can also highlight the special moments of the year that are sure to elicit nostalgic reactions from your child. 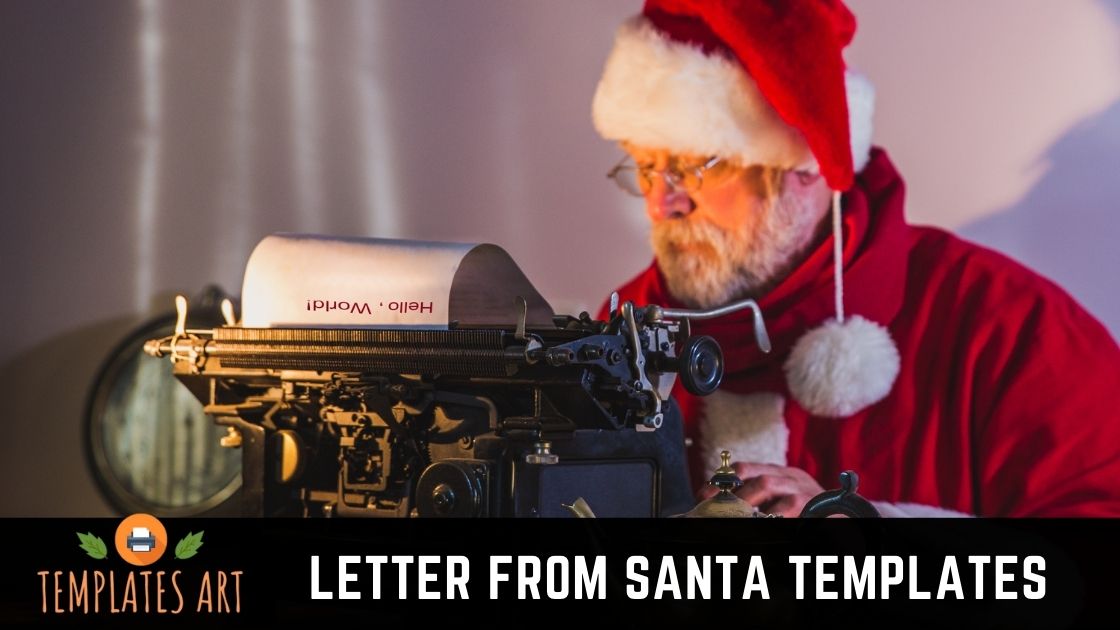 If you are doing it for several kids, it is best to personalize the letter as much as possible. Include a message for each of the kids to make the letter more personal. You don’t want to sound overly general in the letter. The children should want to believe it’s from the north pole, not from their parents!

1. What is a letter from Santa?

A letter from Santa takes advantage of the notion of father Christmas to reward kids for good performance or for being good children. It is disguised to ensure the kids think it’s from the north pole.

2. Can I send the letter through the postal service?

Why not? Sending the letter from the postal service could add that layer of believability to the letter. It would make the children mightily proud to pick the mail and see the letter from Santa among your other mail.

Letters from Santa can be difficult to write, especially when you are bereft of any ideas. However, with the templates we have here, writing them should be a breeze.

Download them here, customize the message and get your children in the perfect Christmas mood.

Jim Matthew is the man behind ArtHopper where he shares useful printable and templates that are required on a daily basis.

It's that time of the year again when all everyone can hear is the sound of jingle bells as Santa approaches. Gifting season's almost here with us, and most of us can't wait to see what we get from...

With Christmas around the corner, maybe it's time to recap the elf on the shelf tradition. But for that to be possible, you will need the elf to send a letter or letters depending on the number of...

Hi there, I am Jim Matthews. ArtHopper is the place where I share useful printable and templates that we use on a daily basis.

ArtHopper came into existence because of my frustration when I needed a specific template. All I could find was sites listing those printables but not actually giving the download option without paying.

That's why ArtHopper is 100% Free For everyone! Zero Costs!